A lot of people struggle with weight problems and obesity, while for a small percentage this may be genetic, for most it is all about their lifestyle. Sedentary lifestyles consisting of little or no exercise and a diet high in fat and calories are the main culprits when it comes to adding an extra weight that can be hard to shed. The common and most obvious high calorie foods are the fried foods group, sweet drinks, beers but some food also thought to be healthy can be full of fat and calories.

One of this foods is nuts (ground nuts and cashew nuts).
Research has proven that vegetable fat is highly nutritious because plants make unsaturated fats with a lot of high density lipoproteins commonly known as ‘good cholesterol’ because it prevents arteriosclerosis. However, too much nuts can add to your total body fat content. The WHO estimates that an adult needs about 19 g of essential fats per day, any more than that goes to be stored as reserve in the body, a cup of nuts contains 800 g of fat.

Milk is very nutritious as it contains the most complete and digestible proteins.
While milk and dairy products may be the best source of calcium and proteins among animal products, cow milk has a large amount of fat needed for the development of the calf but not for human beings, especially adults. The fat in cows milk contains low density lipoprotein which is the bad cholesterol as it constitutes about 75% of total blood cholesterol. The 2% fat in low fat milk is calculated from the weight of the milk and not from its calories, which means that the percentage calories remain the same.

Recent scientific research has discouraged the frequent eating of meat.
All types of meat from pork to beef and lamb should be totally discouraged or eaten sparingly.If you are a meat consumer, you might want to consider the intensive cattle raising processes on farms and industrialized exploits like the hormones,tranquilizers and artificial foods they eat. Due to the unnatural foods fed to cattle and the sedentary conditions they are bred in in modern cattle corals(which almost reaches total immobility) the meat from this cattle may look lean but contains much fat.For example; pork , its lean meat contains around 18% fat, while bacon from pork has 57 g of fat in 100 g of the bacon. Animals also contain a large amount of saturated fatty acids that increase the production of cholesterol in the blood. 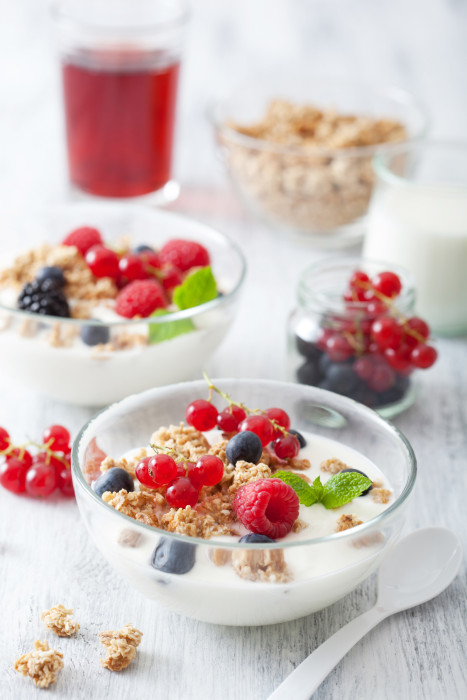 Cereals make up for a quick breakfast whenever one is in a hurry, but not all cereals are good.
Cheerios and shredded wheat may be good but others like fruit loops and sugar smacks are laden with sugar which have a lot of calories. Apart from the calories coming directly from the sugar in the cereal, the high sugar content can also induce you to snack more. Since this is refined sugar, it enters the blood stream quickly resulting in a quick energy boost or sugar high, the body produces insulin to lower the high blood sugar levels. This downfall is too fast and often one feels hungry and tired(sugar blues) which will cause you to pick another sugary snack, then another and another, increasing the number of calories taken per day.

Salads are great foods as they come whole(unprocessed) and raw, but the salad dressings can counter the advantages that come from eating salads. The thick, oily dressings in salads not only contain high fat content but the sugar also increases the total number of calories found in eating salads.

A slice of apple pie contains 800 mg of salt and 1 cup of minute rice has 120 mg of salt.While salt by itself may not be a food, it is a common ingredient in most dishes. Our bodies need the sodium from salt but excess sodium can stay in bod tissues and hold 5-7 extra pounds of water weight.

Coffee is a common drink that has recently received a lot of attention from researchers with claims of being beneficial because it has antioxidants but this is another caloric bomb. One cup of coffee with cream and sugar has 75 calories which may take continuous cycling for up to 57 minutes to burn them completely.